I have to be honest. Speaking Spanish has been a lot more challenging than I imagined it would be. I am no where near fluent and wasn’t expecting to magically become so overnight. However, I thought my language level coming into this was sufficient to hold conversations. On some days it is. But a curious thing has been happening. Every couple of days I have a day where it’s as if I’ve never heard a word of Spanish before. I can’t comprehend what people are saying to me (not even the gist!) and when I try to speak, my brain freezes and words just don’t come. It’s really bizarre. Friends have shared their experiences with days such as this. It’s reassuring to know that I’m not alone in this weird phenomenon.

It seems to happen most on days when I’m feeling stressed or particularly tired. Which makes sense if you think about it. Fun fact: I find neuroscience fascinating! So I decided to brush the cobwebs off some info that I learned in college and did a little research on the language process in the brain. Comprehending and reproducing a new language requires a lot of concentration of multiple lobes of your brain. You have to process the input (what’s being said to you) which happens in the temporal lobe, and produce an output (what you say) which happens in the frontal lobe. This activates your working memory to recall the words you understand and work on reproducing an answer from the store of words up there. Don’t forget to conjugate the verbs! Finally you have produced an answer….hopefully. And this is an extremely basic explanation. There is SO much more going on depending on the difficulty of what was said, the subject, if new words were introduced, and so on. It really is a workout for your brain to process language – and it all happens in an instant. 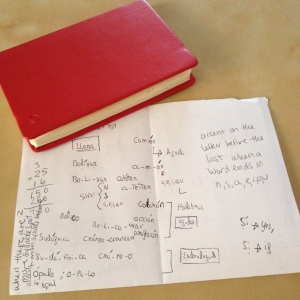 Impromptu lesson from a friend on “spelling with accents” and my little book of new words and phrases I learn.

Add to all that your new surroundings, background noise, stress, homesickness, and a cold, and you have a recipe for confusion. I’ve been surprised to realize that not as many people in Madrid speak English as well as people I’ve encountered in other major cities in Europe. I prefer it this way actually because it forces me to learn. But on a day when your brain just really won’t budge, it’s so demotivating to be unable to communicate. I feel as if I will never be able to improve (of course this isn’t true, but that’s how low it feels). I’ve also found it really difficult to get to know my colleagues. I eat lunch with many of them at school and they are so patient in helping me learn, but on the days I “can’t” speak Spanish, it’s impossible to communicate with them. If you know me, you know that I’m not a shy or reserved person. But because I can’t effectively communicate complicated ideas quite yet, the only thing my colleagues really know about me is where I’m from and how much it snows there. Talking about the weather must be a universal human characteristic.

This has made me think a lot about how amazing an individual’s native language is. It comes with the utmost ease that we barely need to spend any time agonizing over communicating. There’s another thing I no longer take for granted (see The Grocery Blues). I can’t describe the feeling of elation I have when I do successfully communicate with someone in Spanish. Whether it’s 2 sentences or a 2 hour conversation, it’s an enormously happy experience.

Today was my first day teaching here in Madrid. I had so much fun! The students I met are so adorable. No one has ever been so excited to hear that my favorite color is green and my favorite animal is a kangaroo 🙂

As far as first days go, it was really everything I’d hoped it would be. I know it was only day one and I’m confident there will be many challenges ahead, but I am so excited to go to work tomorrow. I don’t know if I’ve ever said that before…

Months and months ago when I was wondering if I should actually do this, I was really nervous that it wasn’t the right career move. Those smiling faces I saw today have quickly proved to me that I was very wrong. Sara Bareilles says it perfectly in her song Uncharted: “Compare where you are to where you want to be and you’ll get nowhere.” This is a bit of retroactive inspiration for me (if such a thing exists). What I’m doing now is so completely different from what I was doing before, and comparing these two things months ago was just not productive.