On June 30, my travels brought me back to Boston for the first time in 10 months. Immediatelty I was showered with what would be seven weeks of an endless outpouring of love and support from my family and friends. It started when my sister ran to me in the airport, nearly running through the area where people aren’t supposed to pass, so that she could be the first one to hug me. After a quick ride from the airport, I walked into my house to the smells of one of my favoite home cooked meals! What can be better than that after all my not-so-successful attempts at enjoying cooking for myself all the time? 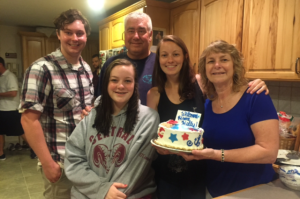 The days that followed were filled of seeing people I love before heading to the woods for a week of camping and relaxing with my family. All of my reunions involved a cook out or yummy food of some sort, and most included delicious beer that I just cannot find in Spain. Everyone wanted to hear my stories (many asked why I stopped writing this blog) and it felt so good to be surrounded by so much familiarity. In fact, I was most surprised at how quickly I felt like I had never left. Of course the comfort of home should always feel like home, but I honestly felt as though I had just been away for a few short weeks. Even driving wasn’t weird after not having been behind the wheel in so long. I was reminded by everyone, however, that it was in fact almost a year and to them it felt much longer. It’s got me thinking a lot about time and how different each individual’s experience of the same amount of measured time really is.

The theme of love continued as I got to attend the weddings of four of my favoite people. Two of my best friends (whom I met seven years ago this past week in Italy) married men I consider to be brothers and I was honored to stand by their sides and be a part of both of these special days. Gina and Brendan were first with their wedding by the sea and it was a blast! As gifts to their guests, they gave everyone a hand printed apron with a special G&B logo created by a friend to keep everyone’s fancy clothes safe from their messy but fantastic meal. True to their personalities, the dancing started the minute the two of them walked in and aside from brief pauses for food and speeches, did not end until the lights came on and we were forced to call it a night. 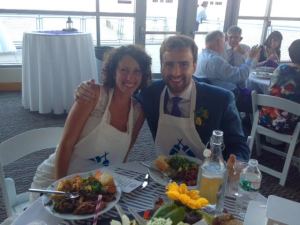 Gina and Brendan in their hand printed aprons!

Katy and Mark had a few days of fun events leading up to their wedding. The rehearsal dinner featured beer brewed by the two of them, served in a kegerator that Mark and his Dad built (with golf-themed taps of course)! The day before the wedding, we attended an annual family golf tournament and dressed appropriately for the occassion (see below). They then celebrated their marriage in an incredibly beautiful barn surrounded by rolling green farmland. It was clear how much love was in the room that night. Similar to what I said before, once the dancing started it never ended. I even saw the photographers standing on tables and chairs to capture the awesomeness that was the dance floor! My friends know how to have a good time 🙂

Pre-wedding golf tournament!
The bride and groom with the best man and the Ms. and Mrs. of honor

For seven weeks I did not have one moment to myself. (This also includes 3 weeks of teaching at a summer program where the non-stop nature of the schedule doesn’t leave much room for down time.) For some people that can sound very suffocating. But for me it meant spending a lot of time with people who I love and miss a lot while having a large ocean between us. While I continue to pursue my dreams of living abroad and seeing the world, my heart is full thinking of how lucky I am to always have such a special place to call home. Thank you to everyone who surrounded me with love this summer!!

P.S. My Christmas flights are already booked so I’ll be seeing you all again real soon 🙂