Everything in Colombia is negotiable. Unfortunately I am not very good at bartering (yet!) but lucky for me, my new friend Carolina is. We tried counting last night to see how much money we’ve saved with all the times we’ve asked for “el precio de amigos,” which roughly translates to “don’t charge me what the tourists pay.” We couldn’t remember every transaction, but it was a pretty significant amount of money. (Side note: the exchange rate from the US dollar to the Colombian Peso is $1USD to $2,897COP. SO confusing! My 4th grade long division skills are slowly coming back to me.)

So the day before we went to Isla Barú, Carolina, Aldo, and I walked down to the port to negotiate a price for a boat ride or bus ticket for the next day. We spoke with a woman named Maria del Carmen who gave us the best price we’d heard – $38,000COP. We had her put it in writing (so important for any of you thinking of taking a trip similar to mine) and got her business card for future reference. Good thing we did all this, because sure enough we showed up at the port the next day looking for Maria del Carmen who was, to nobody’s surprise, nowhere to be found. As we waited we met Ronald (more on him later) and we helped him get the discounted price too, so he was now part of our little group. Finally Maria del Carmen arrived and brought us and two Argentinian women across the street to a little van. We thought everything was off to a great start until we pulled up at a hotel and waited 30 mins to pick up other passengers who never appeared. Well the van driver doesn’t go to the island if his van isn’t full so it was back to the port to combine our bus with another bus. Eyes rolled, people sighed in frustration, but Ronald who was sitting next to me shrugged his shoulders with a smile and said “this is Colombia.” His way seemed the best way to digest the situation.

This is Ronald, 68 years old, incredibly goofy, orignially from China but has lived in California for many years. He started a business there because his daughter wanted to study in the US, so he said to his wife “okay, let’s go.” Now retired and widowed, Ronald travels almost full time and has visited 70 countries. His goal is 100 before he dies. My inspiration! The little card in my hand in the picture is a bus ticket for Mendoza, Argentina that still has some money on it from when he was there. I told him I was going and he frantically dug through his wallet to give it to me. So I spent the hour long ride listening to his insane stories. One of the best was the selfie he took with an iguana in the Galápagos Islands. The angle of the picture made the iguana look bigger than Ronald – “DINOSAUR,” he yelled. I laughed the whole way to Playa Blanca.

Carolina and I planned to stay overnight so we found our beach bungalow in the very farthest spot from the entrance of the beach, plopped our things down and giddily enjoyed the incredible Caribbean Sea. Ronald continued telling me his stories until he had to leave for the bus a few hours later. Before he departed he gave me one more laugh. “You’re sunburned. I can sell you on this beach. FRESH BOSTON LOBSTER, STILL ALIVE!!” Like so many people I’ve met, his time in my life was fleeting but I certainly won’t forget him.

The best social network is a table surrounded by the people you love most. 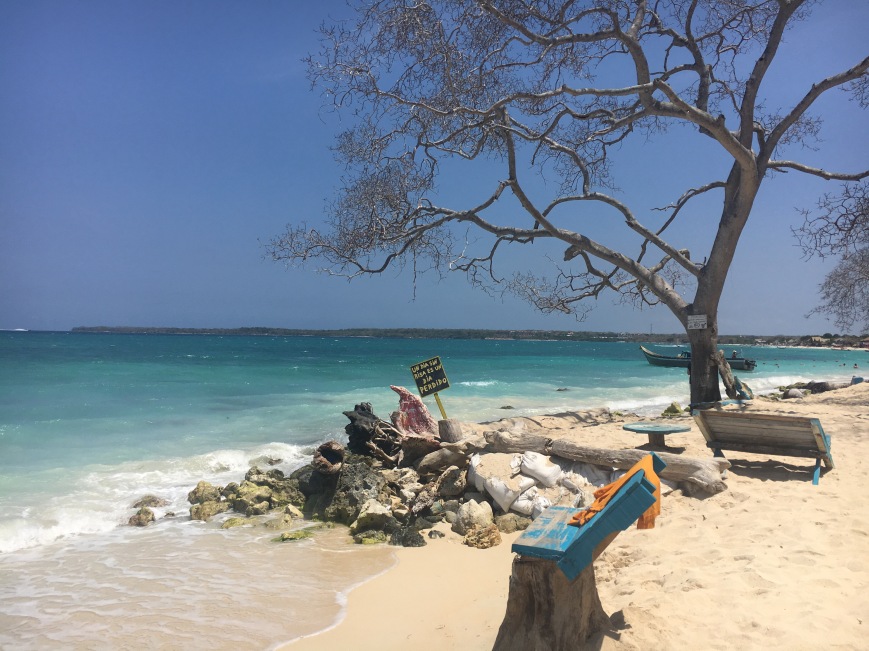 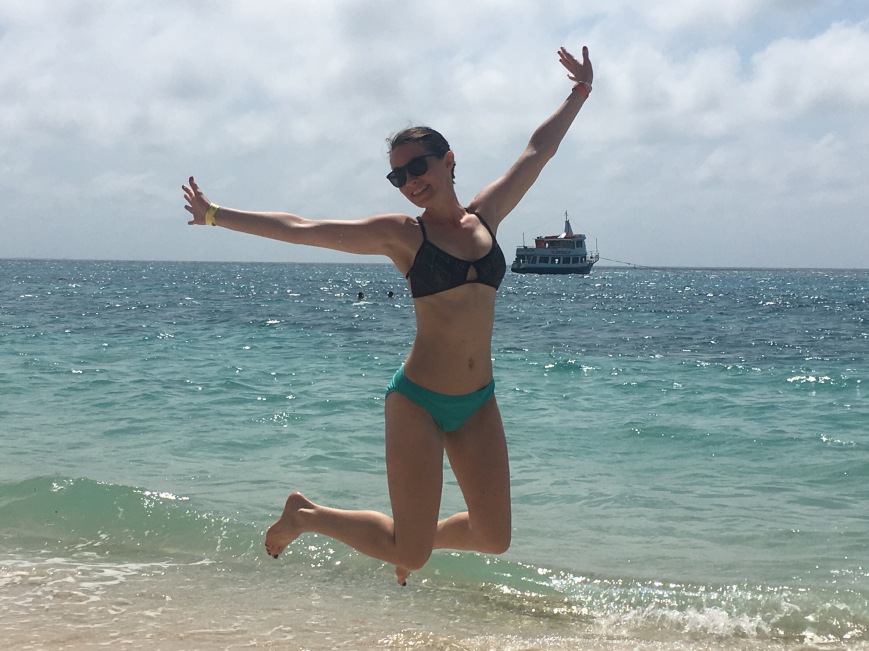 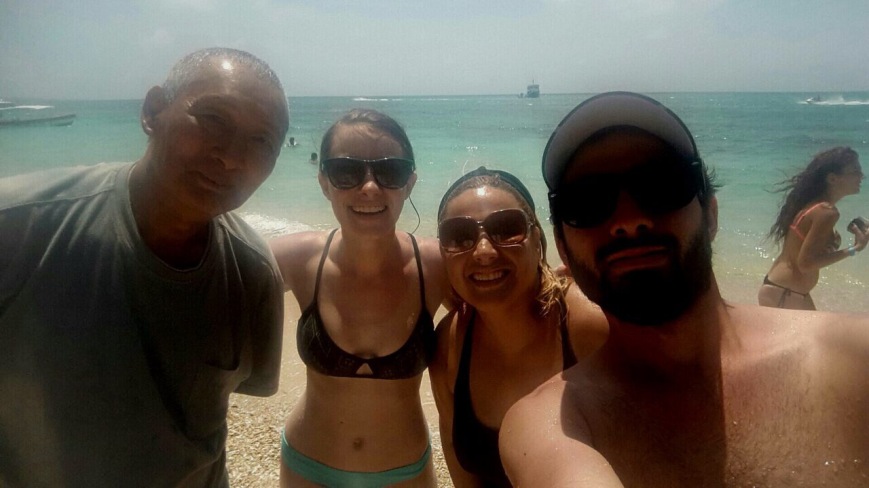 When it came time to check into our room, the owner told us they were just finishing up painting the walls. Umm…what? No gracias, we didn’t want to inhale paint fumes all night. Well that was the only room they had, so we went next door to the next bungalow (the beach is literally lined with them) where Umberto offered us a much cheaper and extremely rustic room for $50,000COP. There wasn’t a lock on the door (Umberto added one for us, no extra cost). We would have to share a bed, but no pasa nada. Pictures can explain this room better than words can. 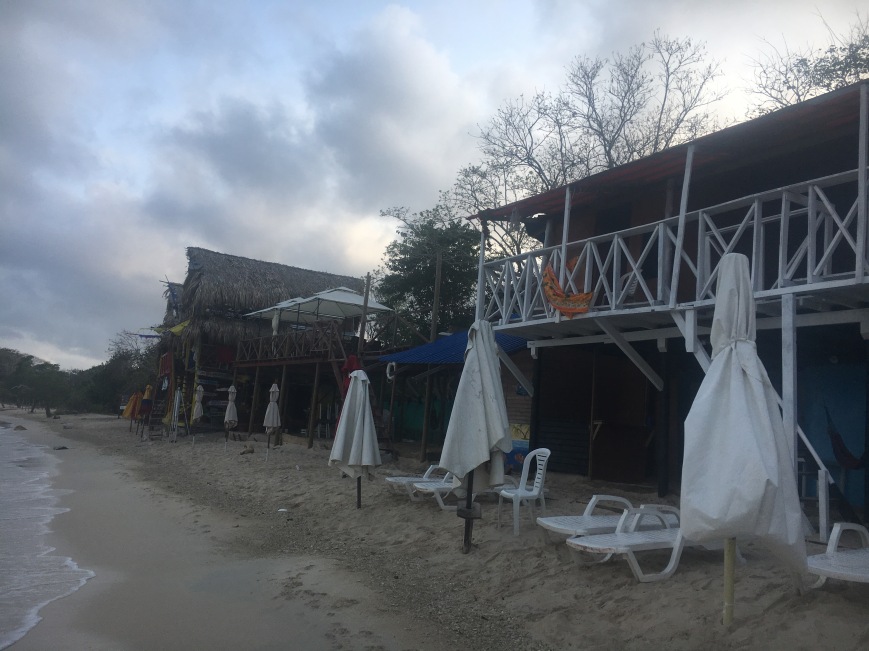 Yes that is a mosquito net above the bed. No we didn’t use it. The ocean was just a staircase away from my pillow. It was pretty awesome, although I can’t say I slept very much with the sound of the waves crashing all night. Very peaceful, very loud. We woke up (or were we already awake?) for sunrise, and enjoyed a few hours of serious tranquility watching the beach slowly come to life before the day-trippers arrived. We chatted with Isaac for a while, another bungalow worker. He’s 24, from Venezuela and came to Colombia for a better life because of how bad things are in his country right now. He was a little shy but always smiling. He sleeps in a hammock most nights, but loves the island because it has everything he needs. It made me feel like the small amount of things in my backpack is exorbitant.

The strong Caribbean sun is not being gentle on my pale, winterized skin, even despite the layers of sunscreen I’m applying and the amount of time I’m spending in the shade. One night in Barú was enough for me, and we returned to Cartagena covered in two days of sand, salt water, and sunscreen (showering was an option, but it costs money and you’re allotted 5 liters of water. It didn’t seem worth the hassle to me). I have one more night in Cartagena before I’m off to Taganga and Parque de Tayrona. This was a great place to start my South American adventure!

One thought on “Isla Barú: 36 Hours of Going With the Flow”