People often ask me if traveling solo ever gets lonely. The truth is, I’m almost never by myself. I’m very energized by being around other people, and sharing experiences with others is what makes these experiences so meaningful (as can easily be seen from almost all of the blog posts I’ve ever written). Some of the most special memories I have from my travels are with people I meet totally by chance. It feels like magic sometimes. Since it’s something I’m asked about often, I’d like to share a little more about how it happens. (This post is essentially a continuation of what I experienced in Bangkok during my first week in Thailand.)

This morning I woke up with every intention of finding a cozy cafe where I could have breakfast and write for a while. I put my things down at a table in Om Garden, a place highly recommended to me here in Pai, Thailand, and went to the counter to order my food. When I walked back to my table, a friendly guy named Carl from New Zealand had sat down across from my things and offered for me to join him (even though my things were already there…a concept we don’t really have in the United States because sharing a table with strangers is just not part of our culture). We proceeded to have a very interesting chat for 2 hours about this and that. Some topics included: religion in Thailand, and why we find it so intriguing to visit temples here but would never walk into a random church at home just to check out what it looks like inside; how the current state of politics in the US is affecting people around the rest of the world (something people from other countries ask me about very frequently); how to know what to do with your life, especially when backpacking and exploring the world is such an enriching and addicting experience; etc. Before parting ways he invited me to join him at a drum circle tonight, which sounds like an unmissable experience! I didn’t get to any writing in that cafe, and that is entirely okay, because as often happens to me, talking with strangers who quickly become friends brings me so much joy.

The same thing happened last Sunday night in the common room of my hostel in Chiang Mai. I was chatting with a group from Canada and told them I was taking the 12:30pm bus the next day to Chiang Rai. Tyler from Toronto happened to have the same bus ticket, and we also just happened to have booked the same hostel for the next night. So I suddenly had a new friend. When we arrived at the bus terminal, it was a bit confusing as to which bus was ours, so I asked another friendly-looking backpacker (Jair from the Netherlands) which bus he was waiting for, and he happened to be on the same bus and booked in the same hostel as us as well. The 3 of us along with Angelico (also from the Netherlands whom we met in Chiang Rai) spent the next three days exploring and enjoying each other’s company. We quickly accumulated a few additional friends in our hostel from the US, France, England, and Germany, and had a great time exploring the area and crowding into the same small table at the Cat Bar in town each night we were there. 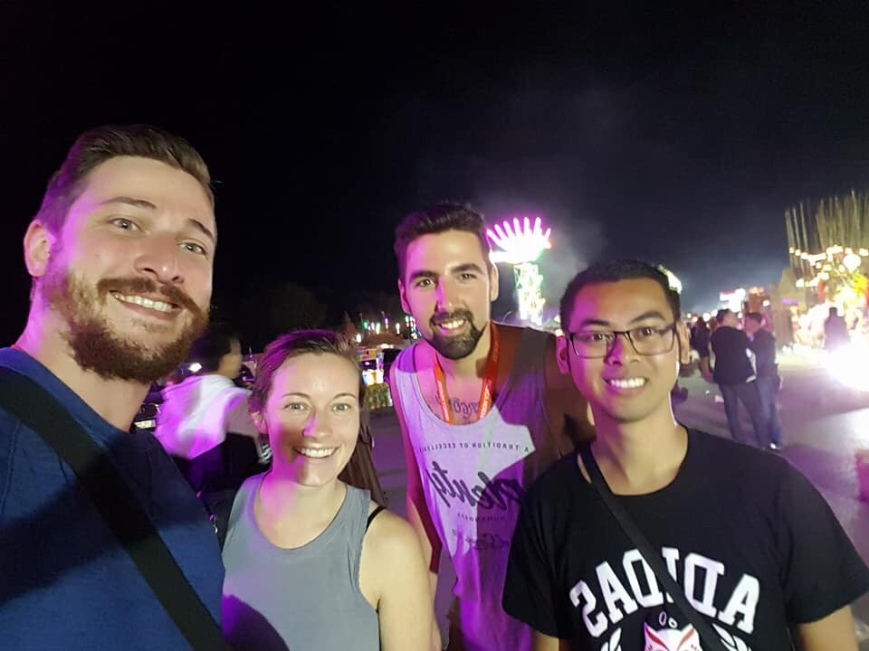 The conversations had in these scenarios seem like they would be quite shallow…where are you from, what do you do, etc. But actually those are some of the last questions to be asked. It’s amazing how quickly deeper topics arise, and how easy it is to share new ideas and consider new perspectives on things that often never get talked about at home with people you’ve known your whole life. I can’t quite put my finger on why this happens, but it happens with such a frequent consistency that I think it warrants some scientific research. Unfortunately these special moments always end as abruptly as they began as people set off on their own separate ways, but it’s also what makes these fleeting friendships so special. You meet someone and within minutes you could trust them to watch your bag, or drive you around on a scooter all day (thanks Jair!) because everyone is in the same boat. You hope for the best for everyone as you part ways, cross your fingers that your paths will cross again in the near future, and at the very least you have new friends to visit around the world on future adventures.

It happened on my trip through South America too. One evening in Taganga, Colombia I was booking a bus ticket to Parque de Tayrona and bumped into two French guys who were looking at taking the same bus the next day. I proceeded to spend the next week with their group of 4 French guys and 2 Argentinian girls in Tayrona and Minca (which was one of my favorite weeks of my entire 3 month trip). We slowly parted ways, but Adrien and I had similar ideas of our plans in Colombia, and flights out a day apart, so we spent 3 weeks traveling together. All because we happened to be in the same place at the same time.

And it happened again in Chile when I met Tom from Paris at our hostel in the Atacama desert. We randomly bumped into each other a few times over the next two weeks, and when we got to La Paz, Bolivia we traveled to Lake Titicaca together. That island is so spectacular, and my experience there was definitely enriched with Tom by my side. On a bus ride to Arequipa, Peru, Tom and I met Carlota and Anna from Barcelona. The 4 of us spent the next week together laughing more than I had laughed in a very long time all the way through the city of Arequipa, the Colca Canyon, and the desert oasis of Huacachina, Peru. Saying goodbye to those 3 was one of the most difficult things I did in South America. 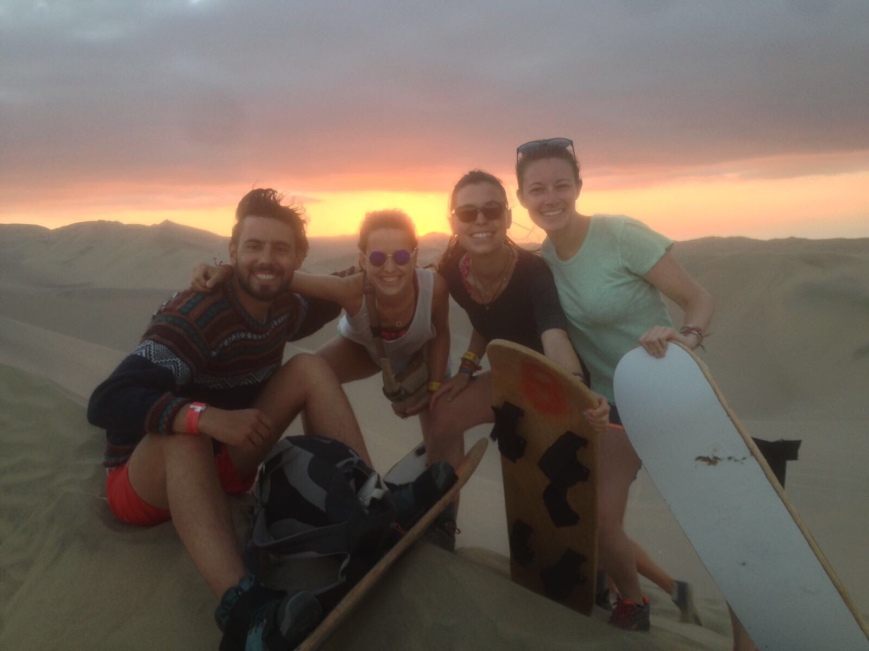 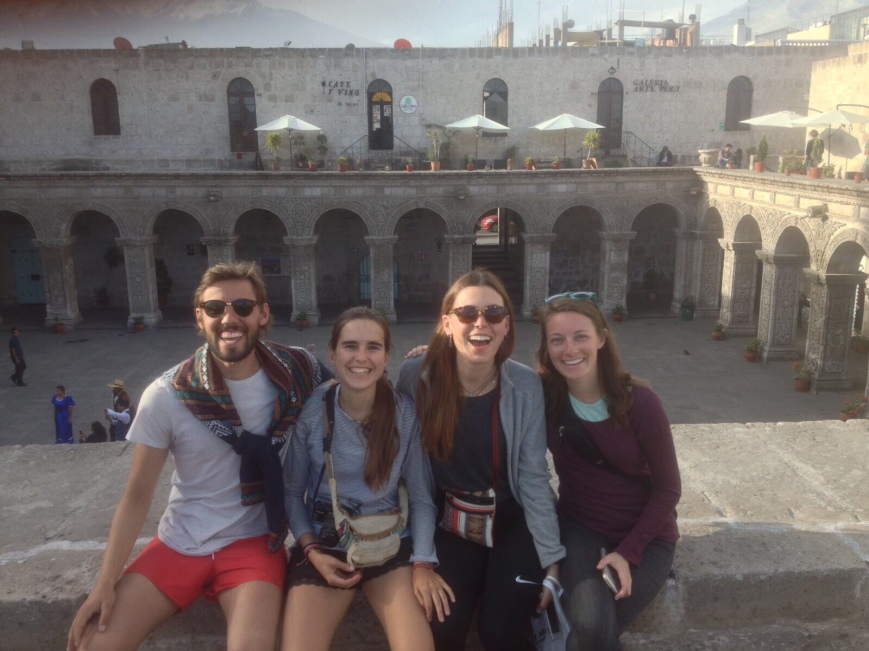 The thing that all these meetings have in common is that they are each completely random in their own ways. In almost every case, had I booked a different hostel (it’s hard to choose from the multitude that exist among the backpacker community), purchased a different bus ticket, slept in an hour later…I may never have met any of them. Similarly, had any of the aforementioned happened, I’m sure I would have met equally as amazing people in other circumstances. But if I believe anything to be true in this world, it is that every single thing happens for a reason. I have faith in fate, and that the people who are meant to walk into your life will. And sometimes they leave abruptly, so it’s important to cherish the moments you spend together. There’s something about these fleeting friendships that force you to live in the moment and not take any moment for granted. Because life is happening right now – not yesterday or tomorrow. It also teaches me over and over that it is okay to trust other humans, something that is not ingrained in American culture. The profoundness that this trust has had on my life is difficult to articulate into words, and I am forever grateful to these people for reinforcing it on a daily basis.

When I set out to write this morning I had an entirely different topic in mind, but I was so inspired by my conversation with Carl that I wanted to share more about these special chance meetings. So cheers to Carl for sharing breakfast with me, and to everyone else I’ve met in my travels for making the experience what it is. May we meet again someday!

2 thoughts on “On Making Friends on the Road”