In the very early stages of planning my trip to South America, my friend Jaime who I worked with in Boston and who is from Chile connected me with his brother, Matias who lives in Santiago. It’s always great to have someone you know in a new place. I thought maybe I’d get to meet up with Matias and some of his friends for drinks one night, or at the very least have some suggestions of cool places to visit. He offered me a free place to stay which was way more than I could have asked for and we figured out both our birthdays fell in the same week I would be there. I planned to stay for a couple of days and move right on to the wine vineyards of Mendoza, Argentina. I ended up staying for 11 days!

My time in Santiago was mostly spent with Matias and his mom Mónica eating as much traditional Chilean food as I possibly could. Ceviche, mariscos, pastel de choclo, cazuela, mote con huesillo, chorrillana, sopaipillas, chacarero, asado, empanadas…and of course pisco – the strong alcohol made from grapes. It’s deliciously easy to drink as a pisco sour and painfully difficult to forget about the next day with your killer hangover. 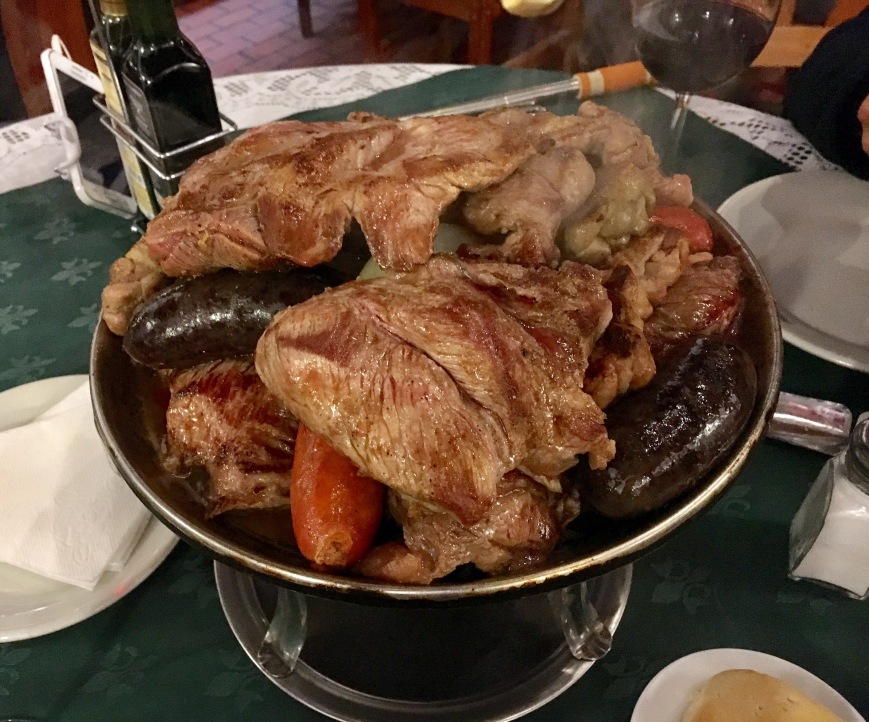 I went to the top of the tallest building in South America, La Costanera. I rode a teleférico to the top of El Cerró de San Cristóbal for a great view of the city (and it’s unfortunately high levels of smog). I went to the beach. I learned lots about the traumatic human rights violations that occurred between 1973 and 1990 under Pinochet’s dictatorship. I also unpacked my backpack and didn’t look at it again for the full 11 days. It was a nice change of pace.

Mónica and I at the top of La Costanera

Selfie action at the top of San Cristóbal

I also had the opportunity to experience my first earthquake while in Chile. In fact, Chile shook hundreds of times while I was there but I only noticed it about 4 of the times. The big one was measured at 7.1 and I just happened to be standing on the 17th floor of a building at the time. Chilean engineers have found a way to build structures so they’re less rigid and they sway a little with the tremors. It honestly felt like I was on a boat. Since everyone around me assured me this was completely normal seismic activity, no pasa nada, I decided against mentioning it to my parents; however, it was big enough to make international news. Needless to say they weren’t too happy to hear the news from the TV instead of from me. Lesson learned.

One of my reasons for sticking around was to celebrate my 29th trip around the sun. Although I knew I’d have a great time celebrating wherever I was, it sounded a lot nicer to be with new friends on my birthday. Matias, Mónica, and their cousin Tom made sure it was a very special day for me. It started the night before when we went to the beach for what Matias promised me would be the best sunset of my life. It was a cloudy day but we were very optimistic about what we would see. Unfortunately the clouds never cleared but it wasn’t until it was completely dark out that we finally admitted we wouldn’t get to see the sky lit up in color. It was still a great place to share a bottle of wine and lots of laughs with a new friend. On the bright side, I have a reason to come back to Chile!

Thanks to FaceTime my Mom was with us at the beach!

Celebrations continued the next day when I finally tried a Terremoto (Earthquake…in liquid form). This drink is white wine, grenadine, and pineapple ice cream. It gets its name for the fact that it’s very easy to drink and when you stand up, everything seems to wobble a little, similar to how a real earthquake feels. From there we went to “Los Adobes de Argomedo” where we watched some Cueca, traditional Chilean dancing that varies by region. I even got pulled out of the audience to participate! Dancing is one of my favorite activities, especially when it includes some sort of cultural connection. To top it off, the host of the show announced that it was my birthday and the whole restaurant sang to me in Spanish. My heart was so full of joy!!

The last year has been challenging for various reasons. I moved home from Spain to live with my family for the first time in over 6 years. I felt lost in terms of what I’m doing with my career (this is still true but I’ve calmed down about it a lot). I was recovering from a broken heart. I knew I wanted to keep traveling but I never imagined doing it by myself. A strange thing happened to me in Santiago – for the first time in a long time I felt like myself again. I laughed, a lot! I sang a lot too, which is usually something I’m very shy about and only do when I’m in a particularly good mood. I’m not sure why all this is true. Maybe it was the place, or the people I was with. Or maybe it’s because I’m successfully doing exactly what I love most – exploring new places, meeting new people, learning new things. Whatever the case, I’m leaving Santiago with the sweetest memories of a place I never thought much about visiting.

It was never my intention to stay in Santiago as long as I did, but my time there further proved something I’ve learned many times in my travels – it is never the place itself that makes a place special, it is the people you meet there that carry all the importance. I have met some of the sweetest people here, the kind that make it hard to say goodbye. I will absolutely be back to this strangely long and skinny country, probably much sooner than I would have thought before.

Feeling really lucky to live in such a beautiful place, and to have some time off to enjoy the summer weather! #optoutside #neverstopexploring
Made it to the most beautiful place I’ve ever seen. #neverstopexploring
When in doubt about a Mother’s Day gift, fly across the country and surprise her! Happy day to the woman who taught me everything I know about love, compassion, and how to have a good time 👯‍♀️To all the moms in my life, thank you for the endless love and selfless care you provide to the world. We need you, keep rockin it!! ♥️xoxo
Thank you so much to all the people near and far who showered me with love yesterday on my birthday! 31 is off to an excellent start, and I’m a very lucky lady!! Special shoutout to @ohwhit, @lmonroy303, and Colorado’s spring flowers for celebrating with me. 😍🌸🌷☀️